An Aussie Year, written by Tania McCartney and illustrated by Tina Snerling, and Anzac Ted, written and illustrated by Belinda Landsberry, have both made the shortlist for West Australian Young Readers’ Book Award 2016 in the category of best picture book. The Award operates by inviting young readers to nominate, through their libraries, books that they have enjoyed. These nominations are then considered by the WAYRBA committee. We love these books and it is good to know that the audience for whom they were written loves them too. Congratulations to Tania, Tina, Belinda and EK Books publisher Anouska Jones! For more information visit http://wayrba.org.au/2016/01/27/picture-books-shortlist-2016/

What the media are saying about Anzac Ted

“Anzac Ted is about a teddy bear who is looking a bit torn and tattered, but he has a pretty special history,” – Click here to read in full

“this delightful tale told in verse is very much about not judging by appearances and the hurt it can cause … the watercolour illustrations are simply beautiful.”

“…tells a heart-warming story about a teddy bear passed down from grandfather to grandson.”

“I really loved this, I found it very moving and yet it gets its message across in an accessible way for child audiences.  Although it is obviously more relevant for an Australian school audience, I think its underpinning messages would be understood by children in the UK … a good addition to existing school books on the First World War.”

“Belinda Landsberry’s charming Australian picture book pays tribute to the Anzac forces of the First World War, legends even in their own lifetime, and now a vital part of the centenary commemorations. The book, with its expressive hero and evocative illustrations, is also a reminder to young children not to judge on appearances.”

“I love this book. It speaks of what is important,and not all the bells and whistles that have become a part of our every day life. It speaks of our heroes and how sometimes you need to look beyond what the eye can see.”

“The beauty of the story is that it makes the impact of the war so accessible to chidlren – what child won’t relate to a toy?“

“While other books have covered the world wars, none has ever made the conflict so accessible to children by telling the story of the war through a much-loved teddy.”

“The story of a battered bear brings the ANZAC legend to life.”

“Anzac Ted is a poignant and powerful children’s book which includes beautiful water colour illustrations that bring the story to life.”

“every time it is read it lets the soldiers who are no longer with us live on, gives those serving their due” 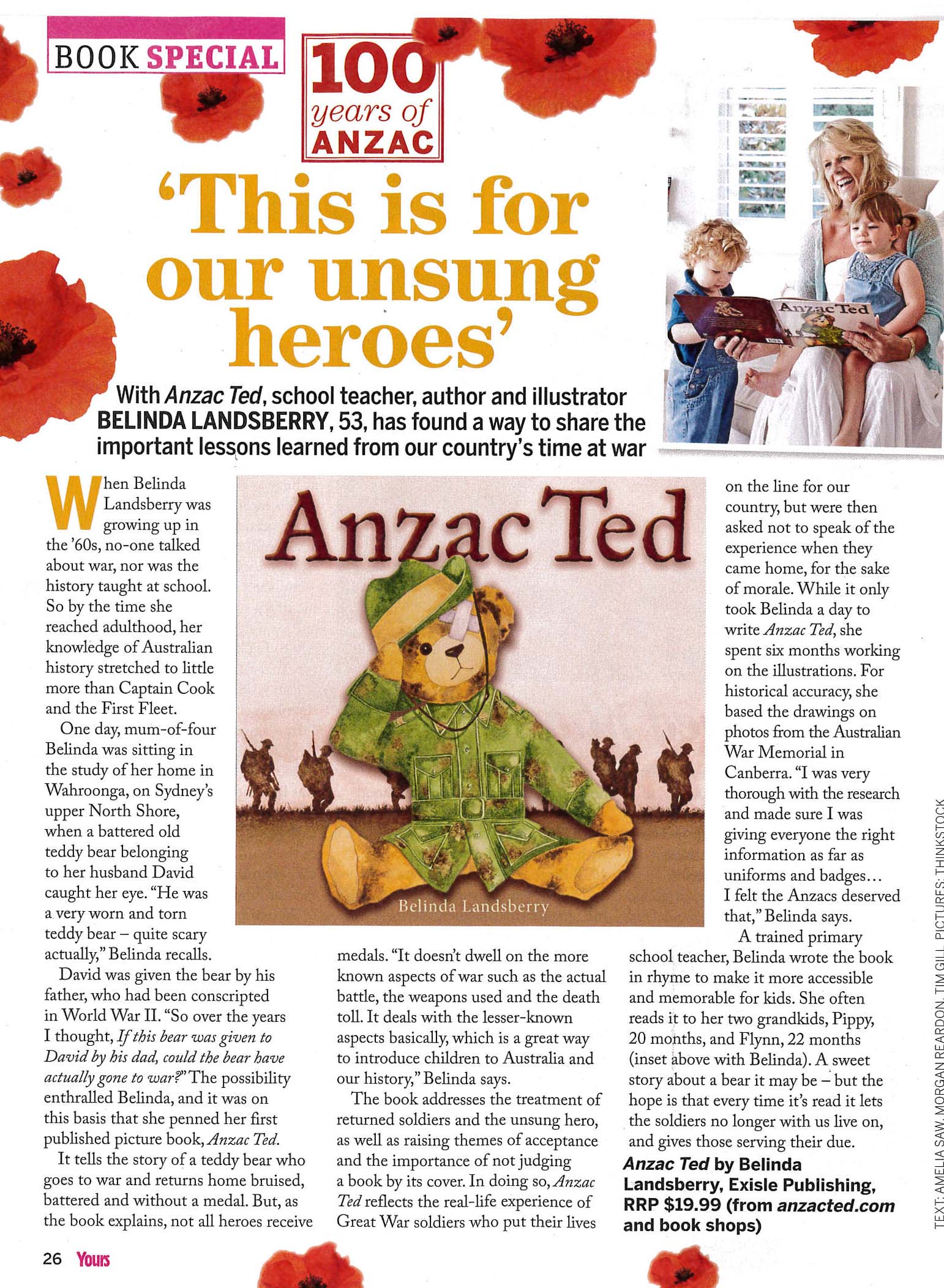 “As we celebrate the centenary of Anzac Day this month, here’s a story to share with the kids”

“a very special kind of book” 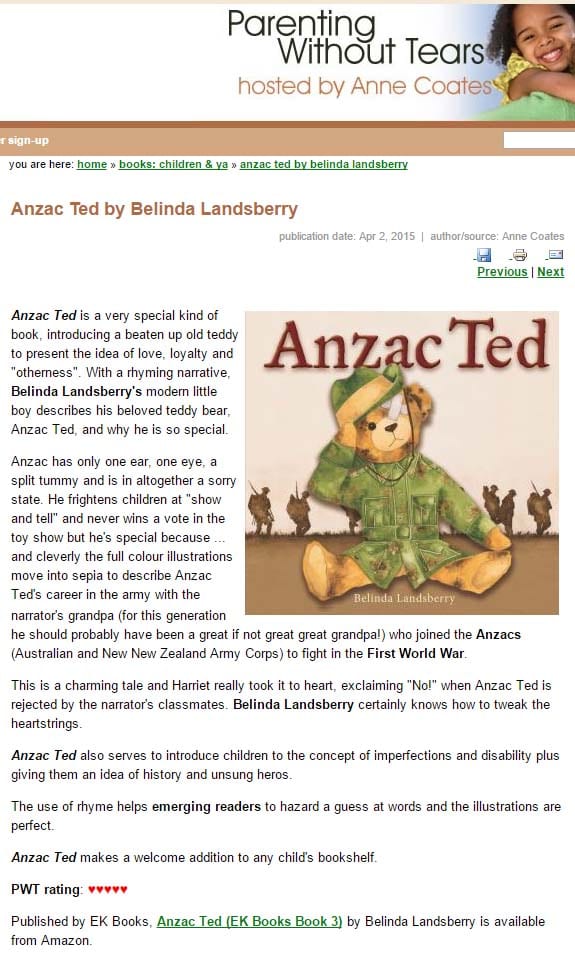 “Anzac Ted may look scary, but this old bear is an unsung hero”

“I thoroughly enjoyed the book, as did the children and after reading it we talked about the Anzacs and what it meant for us”

“Children will love the detailed pictures of the teddy hero – battle scarred, patched and missing bits. I am sure they will remember their own loved teddies and connect with the story even more” 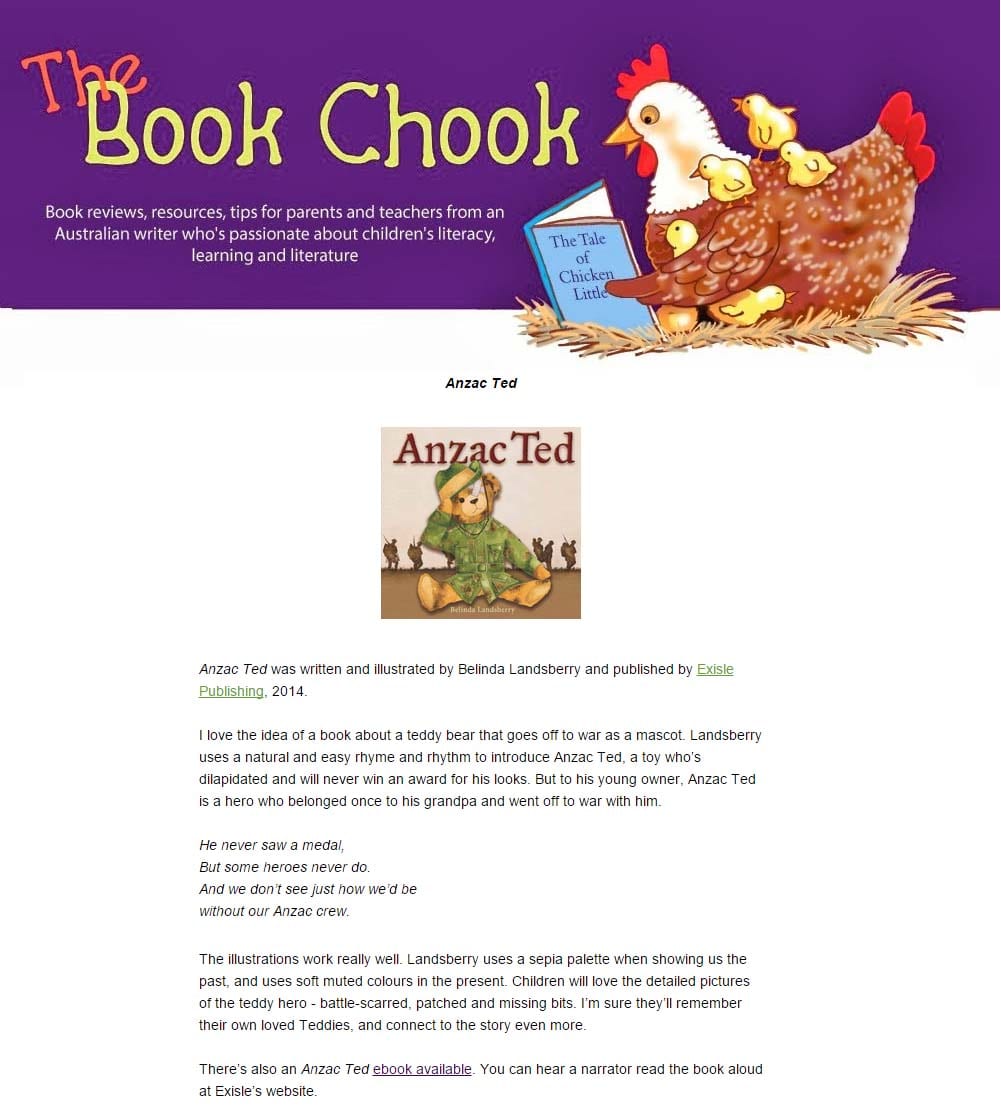 “It’s a good choice for 5 to 8-year-olds with a family member who has experienced war, or for parents wanting to discuss the concept of war with their children.”

“A poignant tale, but still accessible to small children for whom their ancestors’ war stories must seem a million miles away.”

“A poignant and powerful children’s book that includes beautiful watercolour illustrations which bring the story to life.”

“Anzac Ted is a spectacular story that both adults and children will enjoy reading time and again.”

“Do you have a favourite genre? What do you enjoy most about it?” ” I have a couple of favourite genres – children’s fiction (including picture books), YA, fantasy, biographies and historical fiction probably take up most of my bookshelf space.”

“This is a lovely picture book for children aged 4-6 years that will allow very young children to access just as little of the Anzac legend.” 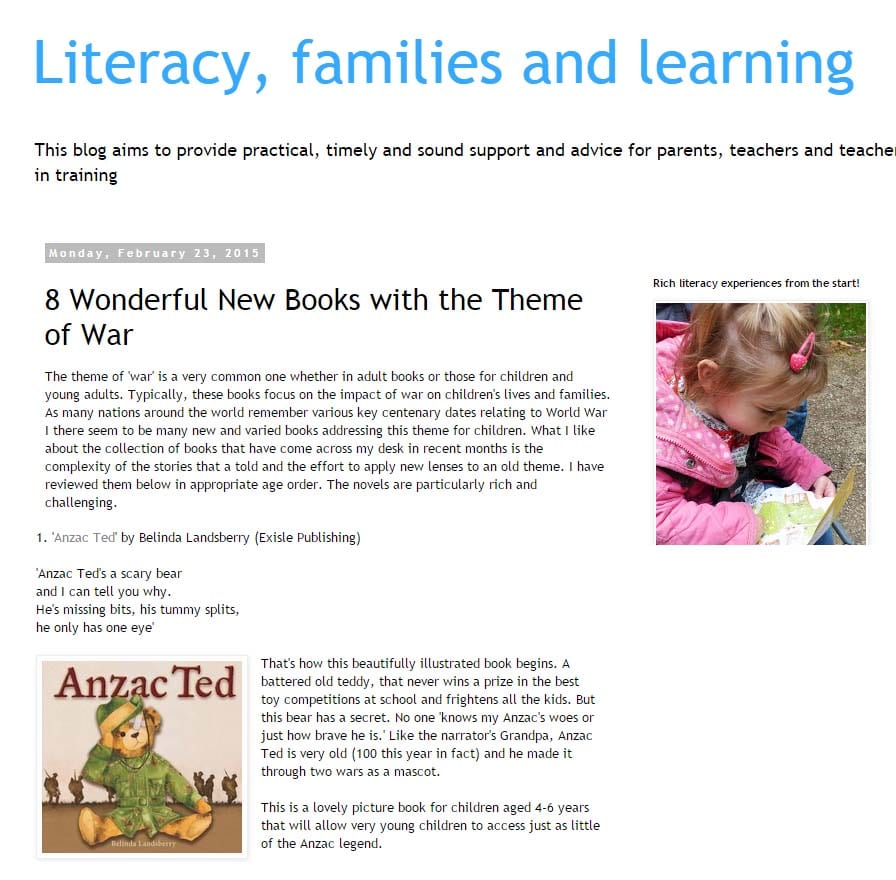 “…this is another fitting tribute to one family’s experience of war and to the war stories and memorabilia that are handed down from generation to generation.”

“Debut author (and illustrator) Belinda Landsberry shares the Anzac story with a poignant tale that children on both sides of the ditch will be able to identify with and enjoy.”

“As we approach ANZAC Day again, it is always lovely to have some way to really engage children with the importance of what our ANZACS did for us. Anzac Ted is a new picture book that can help you do just that, in a beautiful way that’s gentle enough for many little ones to cope with, and yet doesn’t completely avoid the more difficult subject matter.”

“Told in rhyming verse, this picture book provides a gentle introduction to the ANZAC story”

“A simple verse story with powerful evocative illustrations…especially suitable for upper primary children as they learn about the ANZAC event and other elements of World War , and indeed all wars” 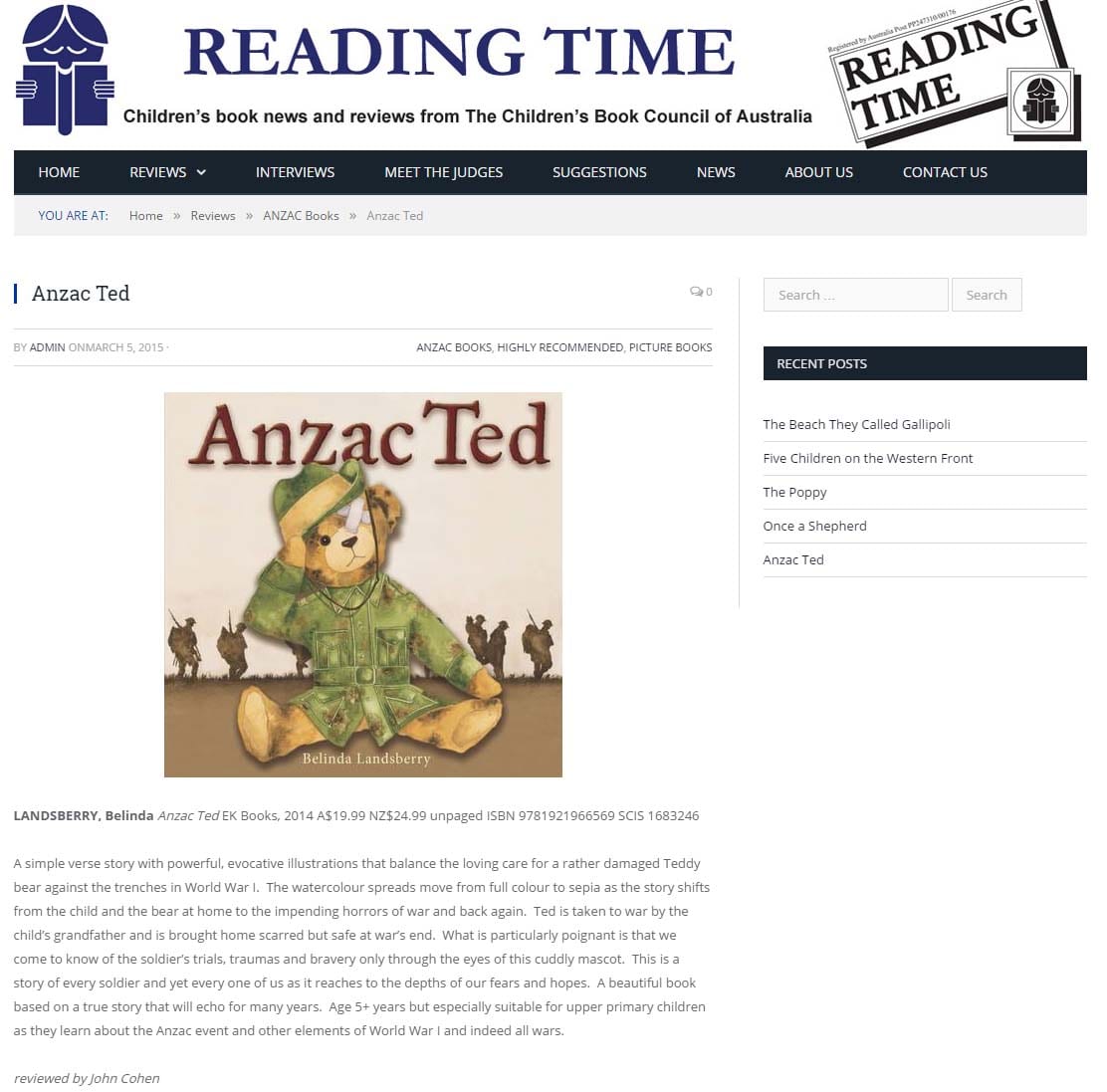 “A heart rending story, touching the depths of spirit of the Anzacs” 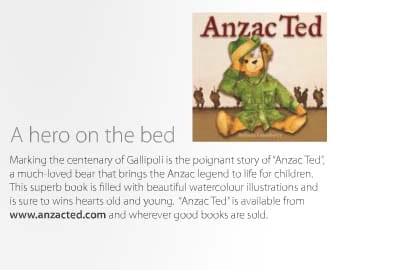 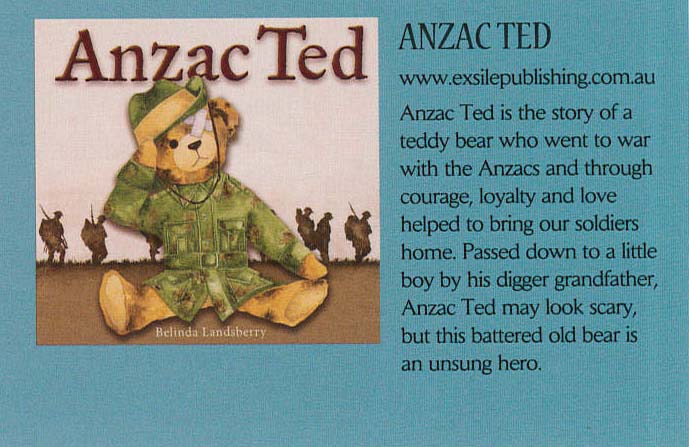 “Belinda has taken a cherished member of her family and woven a wonderful ANZAC story, of mateship, courage and unity around him.  It is a beautiful lesson to children not to judge a book by its cover (or that bear by its fur).  The story reminds us that many of our diggers enlisted as barely more than boys.   Ted became to them a symbol of peace and hope and home…….. a symbol of home. Personally I think this is a must for every young child’s home library and if Mum or Dad are wearing a uniform, or Grandma or Grandpa served, then doubly so.  This should also be in every Primary School Library and of course the Australian War Memorial should be selling it.”   For more, visit the blog here:  http://aussieheroquilts.blogspot.com.au/2015/02/anzac-ted.html

Anzac Ted is a poignant and touching book … visually striking … a beautiful and important book: especially as we commemorate the 100th anniversary of World War 1 and in particular the Gallipoli campaign.” – Buzz Words

Anzac Ted is a unique children’s book, including stunning watercolour illustrations … Anzac Ted’s themes of love, acceptance and the importance of family will resonate with adult readers … and with older readers for whom the war themes and illustrations will be touching  and nostalgic.” – Playground Queensland Book Reviews

“This is a heartfelt and beautifully illustrated book encompassing hope in the face of fear, a family’s heritage and our national legacy.”

Anzac Ted is a strong, timely tale. The first published work by author and illustrator, Belinda Landsberry, it takes us back to 1914 when young men – often just boys – enlisted as diggers. Knowing from the very first pages how dearly loved Anzac Ted is by his 21st century family, we are not surprised that Grandpa Jack felt no shame taking his teddy off to World War 1 and introducing him to his comrades. Wherever Jack’s war took him, the young soldiers adopted Anzac as their mascot. In return he brought them peace, hope and memories of home. Landsberry has a gentle touch with her words and her pictures. Using just the right amount of lines per page and rhyme per line, the text moves seamlessly between Ted at home, Ted at school, Ted at war and back again to the boy who loves Ted today. Sepia tones mark the journey back in time, with the final page showing a poignant, beautifully drawn silhouette of the lone Australian digger keeping vigil on Sydney’s Anzac Bridge. This story is significant for our nation as we remember the events of a century ago. It is clearly also a personal story for the Landsberry family. Anzac Ted deserves to be our very own Aussie Velveteen Rabbit, loved by all who have cherished a special toy made “scary” by love. Helen Pearson, whose love of words has led her into teaching foreign languages, English and literacy in schools and at university. She also has authored articles for teachers and parents, and spelling textbooks to help students write down the delicious fruits of their ripening imaginations.

‘There’s no doubt that war and conflict can be hard concepts for children to understand. Anzac Ted helps to explain the Anzac legacy to the younger generation. The book, written and illustrated by Belinda Landsberry starts with a description of a raggedy scary-looking teddy bear Anzac Ted that is the object of disdain at Show and Tell at school……………………………………………….. Focusing on themes of war, conflict, family and love, this is a very special children’s book. As we approach the 100th anniversary of the Gallipoli campaign next April, share the story of Anzac Ted and the Anzacs and remember their sacrifice.’ Read full review here

‘…..Reading picture books is also a great way to help your children understand this complex side to our history.  Anzac Ted is a beautiful story that gently teaches children about the sacrifices that Australians had to make during war, in a way that they can understand…….’

Book review plus 12 Curly questions to Belinda  ‘…….As we approach 2015 and the 100th anniversary of the departure of the first Anzacs, Anzac Ted offers parents and teachers a very age-appropriate way of sharing the story of Australia’s First World War soldiers with children………..’ Full review Curly Questions

‘Anzac Ted’ is a charming book. Although it is a story about a little boy’s teddy the underlying theme is war. The teddy given to the little boy by his grandfather is all tattered and worn from its experiences during World War 1. The overall presentation is exquisite. The beautiful watercolour illustrations are excellent and capture the poignancy of the story. Although the book is about a serious world episode it has been written in such a way that the concept is accessible to children. In fact it is a delight to read. ‘Anzac Ted’ could be an excellent means of introducing primary children to the concept of war. It should be found in all libraries.